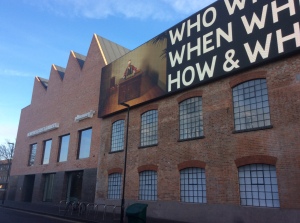 I don’t believe that Gavin Turk would be much offended by a declaration that he is a bit of a smartass, even if the uses to which he puts most of his surface outrage is towards more sobering observations and critiques- of identity, ownership and the destructive reductions of a rapacious consumer culture. His retrospective show at Damien Hirst’s Newport Gallery (a stunning conversion of three former Victorian-era scene-building studios  into a 37000 square foot, bi-level gallery in Vauxhall), which addresses work from the past 25 years of practice, is prodigious with a playful, maddening, slightly bewildering vortex of obsessively self-reflective, explosively brash pop exuberance.

The first room devotes itself to studies in signature and definition, the ways in which the individual can both assert control over identity, and the ways in which that control may be helplessly ceded, appropriated by wider culture and media into a larger bottom-feeding narrative (hence the elegance and self-possession of his framed exercises in signed paper cutting leading to a mock-up of a Hello! Magazine cover in which he and his family become the subject of cheerfully vulgar gossip and lifestyle profile), although the most resonant pieces in the space are the oddly hypnotic perpetually revolving Perrier bottle and knife on formica tabletops, the underpinning mechanics of which are fully exposed, quite perplexingly, objects trapped and lost forever in endless orbit.

Turk’s thesis piece, a Blue Plaque dedicated to himself (and possibly misunderstood by his teachers as an empty provocation) hovers in a vast room on its own, an arch comment on what qualifies as apotheosis of an artist’s career or worth. As a viewer, engulfed in the near-hallucinatory white wall space, you feel as if you are floating in the room with nothing but the blue circle as grounding. Other rooms take you through Turk’s Pollock-like phase of intricate, elongated splotch paintings (somehow softer and more inviting than his fellow artist’s samples), his Warhol homages (the centrepiece of which is the frighteningly compacted auto remains of a motor crash) and his series of sculptures exploring British identity and character, through figures such as the punk and royal guard (an eerie dispossessed soul has wandered into the space from his soiled bedroll one room over). 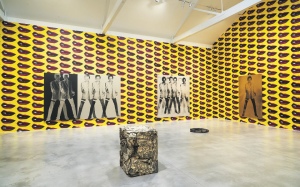 The final room consists of nothing but bags of rubbish and detritus (bronze sculptures), all surrounding the central object, an obsidian skip akin to a black hole, its annihilating maw ready to suck everything into itself. It’s an alarming, uneasy statement on junk culture, encompassing even the gallery experience, feeding work to the

whims of commerce and feckless taste rather than longevity and true worthiness, cheapening the process all round. Turk often quotes his progenitors, many pieces here finding antecedents in poses, gestures and styles.

He came a bit late to the notorious Young British Artists enclave (Charles Saatchi first exhibited him in his Sensation exhibition in the 90’s, placing Turk firmly in the second wave of the movement), but his working methods and themes are very much in keeping with the very particular aesthetic sensibilities of the influential (and still controversial) group. Who What When Where How & Why continues through 26 March